The Istanbul Chamber of Industry (ICI) organized a panel to discuss the post-Brexit situation concerning the free trade agreement with the UK. In the meeting, the advantages of the Free Trade Agreement (FTA) signed with the United Kingdom, one of Turkey’s largest trade markets in Europe, and the ways to further develop the economic relations and investment opportunities between the two countries were discussed. A panel was also organized with attendees who closely monitored the FTA process and who are familiar with the market.

The Panel on the British Market and the Benefits of the Free Trade Agreement was held via a videoconference and hosted by Erdal Bahçıvan, the Chairman of the Board of Directors of ICI. At the panel were udith Slater, the British Consul General to Istanbul and the Eastern Europe and Central Asia Trade Commissioner, and a large number of industrialists and business people.

At his speech during the inauguration, Erdal Bahçıvan stated that the recently signed agreements, including the investment agreement between China and the EU, the USA-Canada-Mexico trade agreement, and the largest free trade agreement covering 15 countries in the Asia Pacific region have established new balances of power in trade. “Such agreements will cause radical changes in the global trade in the near future” said Bahçıvan. “Regional cooperation is very important for economy in today's trade. It is also a great advantage to be a local actor and it is where the importance of Free Trade Agreements becomes visible.

“The free trade agreement signed by Turkey and the UK in the last days of the last year has introduced a new dimension to the economic relations between the two countries. Signed at such a time of need, this agreement offers many opportunities as it reinforces and deepens the political and economic relations.” 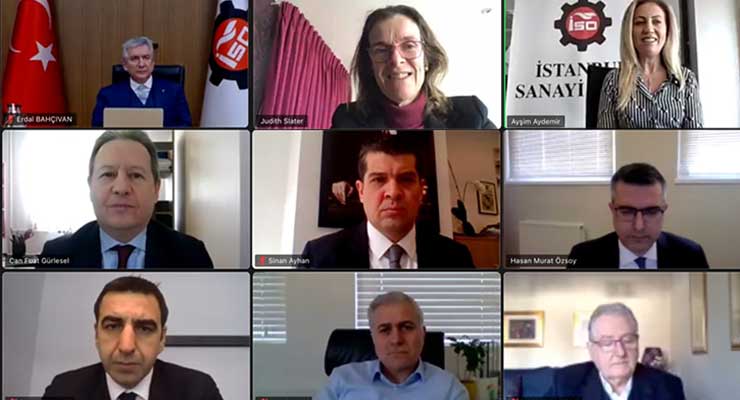 Bahçıvan also pointed out that the agreement covers all industrial and agricultural products imposing no additional taxes and sanctions by the United Kingdom as of January 1, 2021 and the trade between the two countries continues smoothly.

Bahçıvan: “The two countries will come together again in two years to talk about expanding the scope of the agreement. As a result, it will be possible to expand the second phase of the commercial relationship to include investment and service sector and to make it much more inclusive.”

As emphasized by the Chairman Bahçıvan, there is a multi-dimensional relationship between Turkey and the UK as a result of the influence of strong ties coming from the past. The UK is both one of our most powerful trade partners in Europe and also a NATO ally. And the cooperation with the UK in the economy and the defense industry will be one of the top priority agenda item in the upcoming period.

Bahçıvan mentioned their satisfaction with the United Kingdom’s nonpartisan support for Turkey's EU membership as a state policy despite leaving the EU of its own choice. “The UK is the 7th largest market for Turkey’s international trade, and the bilateral trade balance has been in Turkey’s favor for many years. Exports to the UK, which is one of the leading markets of exports in many sectors, especially in automotive, white goods and ready-made clothing, reached 11.2 billion dollars and imports were 5.5 billion dollars in 2020 despite the negative impacts of the pandemic. Considering the high potential of trade, the two partners should aim to increase this figure to higher levels in a short time with the recently signed free trade agreement.

udith Slater, the British-Consul General to Istanbul, also took the floor and emphasized the importance of bilateral relations. “Making the relations stronger will contribute to making the two countries safer and more prosperous” said Slater.

“The UK and Turkey have deep commercial ties and close ties. The United Kingdom is Turkey's second largest export market and there are British investors in Turkey. Free movement of goods provides many contributions, mainly including employment.

“In the United Kingdom, digital technology has generated 3 million direct jobs, and the increased trade between Turkey and the UK is progressing through mutual investments. The volume of mutual trade reached 3.4 billion dollars during the last year. Turkish startups are becoming more visible in the UK’s entrepreneurship ecosystem every other day, and Turkey provided many medical supplies for the UK during the first phase of the Covid-19 pandemic.

“The United Kingdom is Turkey's second largest export market. Our two-way trade is as high as 19 billion pounds. Our very large British investors are in Turkey such as Vodafone, HSBC, etc. We are also hosting Turkish investors in areas like technology. It is nice to see the Getir Company’s scooters moving around London's streets. The FTA we signed with Turkey guarantees employment in agriculture and industry, as well as maintaining duty-free trade between the two parties. The STA will contribute to the recovery after the Covid-19 outbreak and it is a vital first step for both countries, since it will be followed by another but brand new and ambitious FTA in the near future. The second phase of the FTA will include service sector and digital trade and thus help developing the cooperation potential.”

Next, a panel was held with the moderatorship of Dr. Can Fuat Gürlesel, the Chairman of Economy and Strategy Consulting Services to discuss the direction of the trade between two countries. The panelists included Hasan Murat Özsoy, the Ministry of Commerce Chief Commercial Counsellor to London; Christopher Gaunt, Chairman of the British Chamber of Commerce in Turkey; Sinan Ayhan, Turkey-UK Business Council – DEİK - Executive Board Member and Ford Otosan Formal Relations Director; Vehbi Keleş, Director of Gima UK Ltd.; and Sercan Bahadir, EY Turkey Tax Services Partner.

Hasan Murat Özsoy, the Ministry of Commerce Chief Commercial Counsellor to London, made a detailed presentation on the economic outlook of the United Kingdom. According to the presentation, the UK saw a 10 percent economic shrinkage in 2020, recording total export of 633.2 billion dollars. Turkey ranks the 14th in the UK market. Turkey is also the country with the most foreign trade surplus with the UK.

Christopher Gaunt, the Chairman of the British Chamber of Commerce in Turkey, stated that their chamber was established in 1887 as the second oldest chamber abroad. “In the aftermath of the pandemic, there will be a new world with the new normal where e-commerce will gain much importance. The two countries can work together on issues such as renewable energy and achieve a good synergy” said Gaunt and also expressed their wish to get help from Turkey’s competence in contracting business. “Turkey is strong in automotive and is working to produce electric vehicles. The United Kingdom is interested in cooperating with Turkey for car battery production.”

Sinan Ayhan, the Executive Board Member of Turkey-UK Business Council – DEİK (Foreign Economic Relations Board), and Ford Otosan Formal Relations Director: “The talks could be completed in a short time. The last year passed by in uncertainty, but the trade continues without interruption thanks to the willpower of both sides. The rule of country of origin has been introduced to the two countries’ trade by the agreement, and there is a threat especially for the supply of the industry. These problems occur only because Turkey is not involved in the talks, and the most reasonable solution would be to update the existing Customs Union Agreement.”

Gima UK Ltd.’s Director, Vehbi Keleş said that they expect the agreement to be expanded. “There is a need for lifting the charges on many products through the new agreement, and Turkey should invest in the global brands. Turkish products are considered under ethnic brands in the UK. We could be influential in the UK and the world markets once we create global brands. “

EY Turkey Tax Services Partner, Sercan Bahadır also made a comprehensive presentation on changes in the trade with the United Kingdom. He said: We were able to be informed about the country of origin issue after the agreement was signed hastily. Also, problems are faced regarding guarantee in practice.” Noting that the agreement maintains the existing order, Bahadır expressed the importance of their presence on the table during the talks.

Following the presentations, questions from the audience were answered by the panelists.