As in previous years, this year’s survey of Turkey’s Second Top 500 Industrial Enterprises (ICI Second Top 500) in 2020 has shown important results in terms of the current state and future of SMEs.

ICI Chairman of the Board, Erdal Bahçıvan:

“Since 1998, we have been consistently publishing the ICI 500, one of the most valuable works of our chamber, and the second of our ICI Second Top 500 surveys we have been doing since 1968.

The ICI Second 500 has demonstrated the general outlook of our industry as much as the ICI Top 500, and today, it is a work that becomes more important for us to draw a picture of the Turkish economy and industry.

ICI Second Top 500 reinforces its brand value with the participation of different industries and provinces each year. Compared to ICI Top 500, this study has specific features as it mainly covers companies with SMEs, and in the coming days, we believe that it will be examined with interest and will have a positive effect on the public opinion with its different results.

If I were to mention a few of these results; starting from the fact that the ICI Second Top 500 increased its production-based net sales by 6 percent in real terms, in a challenging year like 2020 with the pandemic, we are witnessing that it gives brighter than expected results in many areas such as exports, employment, profitability, financing expenses, technological structure, and R&D expenses.

At this point, I would like to point out the improvements in many profitability indicators, including sales profitability, asset profitability, operating profit and EBITDA performance. Among the reasons why we see the brightest data on the profitability in ICI Second 500 include supportive practices such as low commodity prices throughout the year, favorable credit conditions and low interest rates especially in the second half of the year, keeping the profit margins high by limiting the operating costs of the companies. We consider these developments to be promising, since it will cause a strong increase of 22 percent in the equity of ICI Second Top 500 companies.

Our SMEs' export performance differs greatly from that of Turkey and our ICI Top 500 study. In this difficult year, there was a loss of exports in the ICI 500, as in the Turkish and industrial sectors. Therefore, the ICI Second Top 500 deserves all the credit for increasing its exports by 1.2 per cent. It should also be taken into account that the ICI Second Top 500's employment gain is faster than the ICI 500's, at 4.6 percent.

Another remarkable indicator for the future is the fact that the total share of medium-high and high technology-intensive industries in the ICI Second 500 companies increased by 3.1 points to 29.5 percent in 2020. Nevertheless, we must keep in mind that new investments and initiatives are needed to achieve the targeted advances in technology and value-added structure.

Of course, there are many indicators in the ICI Second Top 500 that need further improvement, especially in financial terms. For example, the distribution of current and non-current assets, resource structure, net foreign exchange position, public offering trends, desire and abilities to carry out R&D...

Finally, ICI Second Top 500 data show Turkish industry's readiness to strengthen the manufacturing force for healthy growth once the favorable financing conditions are found. This picture is also valuable in terms of demonstrating the significant improvement in the management skills of SMEs under difficult conditions in 2020. We hope these companies' performance is reflected to throughout Turkey and that this positive outlook is sustained in the future as well. As we have always said, favorable financing is the most important factor in preserving the economy, production and dynamism of our country. When we look at the results of ICI Second Top 500 from this perspective, we need to further promote the strong potential of our SMEs." 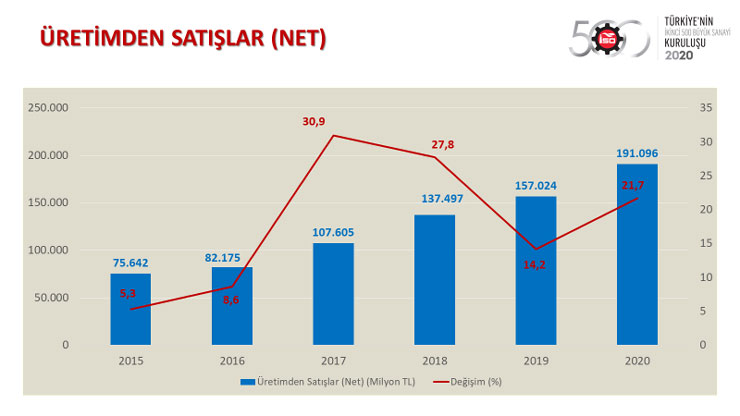 After a considerable increase of 27.8% in 2018, net sales from the production of the ICI Second Top 500 decreased by 14.2 percent in 2019. In a year marked by pandemic conditions such as 2020 and with many companies experiencing shutdowns and production slowdown, it is noteworthy that net sales of the ICI Second Top 500 gained momentum after the fluctuations in domestic and foreign demand. 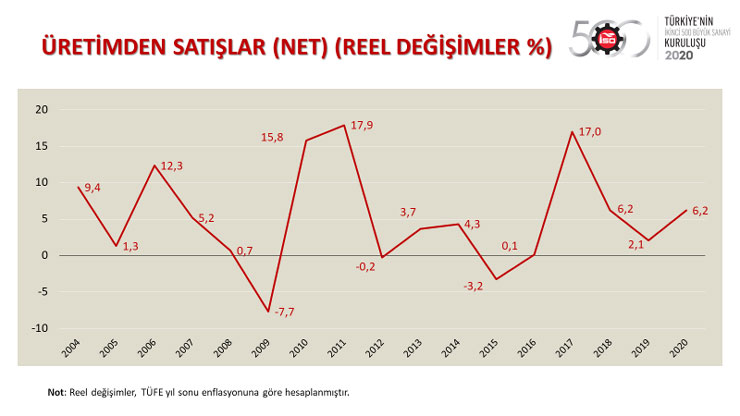 When we analyze the changes in the net sales of the ICI Second Top 500 by subtracting the CPI inflation, we saw strong real increases in 2017 and 2018 after the weak growth in the 2012-2016 period.

Even in a hard year like 2020, SMEs were successful in their production and marketing activities with their adaptable structures, as evidenced by the fact that production-based net sales of the ICI Second Top 500 increased by 6.2 percent in real terms. As you may recall, there was a limited real increase in net sales of the ICI 500, which was announced in May, by 0.6 percent.

The top three companies of the ICI Second Top 500

Looking at the results of ICI Second Top 500, which shows the check-up of Turkey's SME-scale industrial structure, in 2020, a year marked by a severe pandemic, the success in production-based net sales appears in other indicators as well. For example, the ICI Second Top 500 indicates brighter results than expected in many parameters such as exports, technology intensity, employment, profitability, financing expenses, and R&D spending.

An examination of the value added distribution created by the ICI Second Top 500 based on their technology intensity indicates that even though low-tech industries had the highest share with 46.4 percent, the share of mid-to-high tech industries rose. This share increased by 2.7 percent to 26.9 percent in 2020, up from 24.2 percent in 2019. 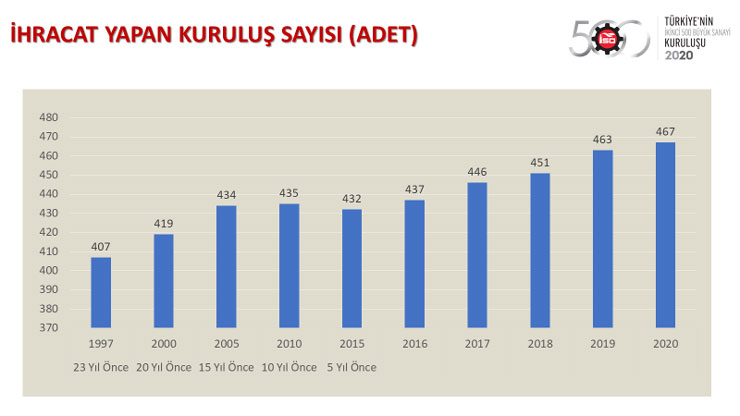 The outbreak of 2020 caused a major contraction in global trade. Export markets remained closed to a large extent, especially in the first half of the year. Despite the improvement started in global trade in the second part of the year, Turkey's total exports fell by 6.2 percent in 2020, as a result of the continuous negative effects of the epidemic, with industrial exports falling by 6.6 percent. The loss of exports in the ICI 500 was 12.8 percent, higher than that of the Turkish and industrial sectors.

Another important development on the export side is the upward trend in the number of exporting companies. The number of companies exporting to the ICI Second Top 500 rose from 407 in 1997 to 467 in 2020, which surpassed the 450s band in the last three years. This is a really positive development since it demonstrates that the tremendous progress of ICI Second Top 500 companies in expanding their international markets. In addition, the ICI Second 500 companies that do not export seem to find it increasingly difficult to find a place in this ranking, just as companies in ICI Top 500.

Another important indicator of profitability, EBITDA (earnings before interest, depreciation and taxes), increased strongly in 2020 following the decline in 2019. EBITDA, which was TL 21.9 billion in 2019 in the ICI Second Top 500, increased by 55.9% to TL 34.2 billion in 2020. This showed that in 2020 companies focused more on their main areas of activity and EBITDA profits.

The considerable increasing trend in operating profit and EBITDA is also reflected in the total pre-tax profit and loss. The ICI Second Top 500's total profit and loss before tax climbed by 90.2 percent in 2020 to TL 20.1 billion from TL 10.6 billion in 2019. 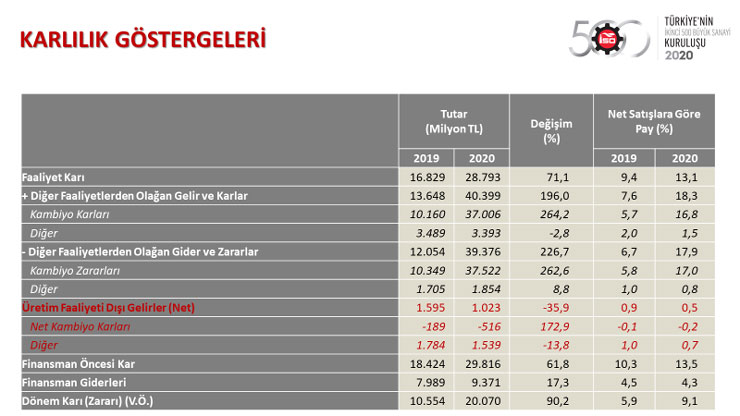 Currently, the foreign exchange transactions of this size seem to have decreased profitability in 2020 as they were in 2019. Despite this negative aspect, the fact that the effect is rather minor indicates that SMEs have improved their ability to manage exchange rate swings.

Financial expenses continued to be one of the main determinants of the profitability of industrial companies in 2020. However, as a result of the developments, single-digit loan interest rates applied for most of the year limited the increase in financing costs of the ICI Second Top 500. The depreciation of the Turkish Lira had a negative impact on financing expenses, which was less than expected.

As a result, the ratio of financing charges to operating profit fell from 47.5 percent in 2019 to 32.5 percent the following year, the lowest in recent years.

In short, ICI Second Top 500 firms devoted a lesser portion of their operating profit to finance expenses in 2020. Thus, they are provided with more favorable conditions to increase their profits and equity. 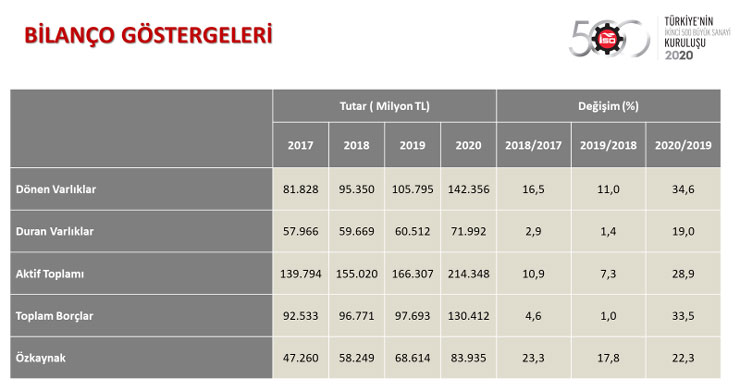 In 2020, ICI Second Top 500 firms experienced substantial equity growth with the help of increased profitability, but they also demonstrated a faster borrowing trend than in prior years.

Even though the situation appears to be worse than in the previous two years, when debts grew much more slowly than personal money, the exceptional conditions of 2020 can be claimed to have had a significant impact in these developments. 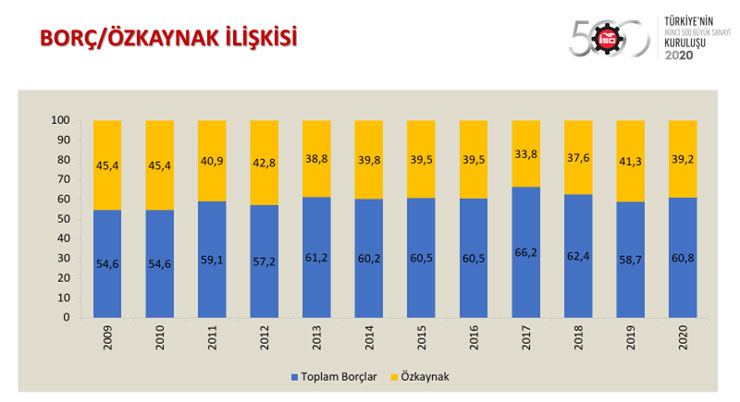 The debt/equity relationship of the ICI Second Top 500 companies shows that after two years of improvement, the debt to equity balance again progressed against equity in 2020.

The image in question demonstrates that the deterioration in the debt-equity balance remains a persistent problem that industrialists must address. 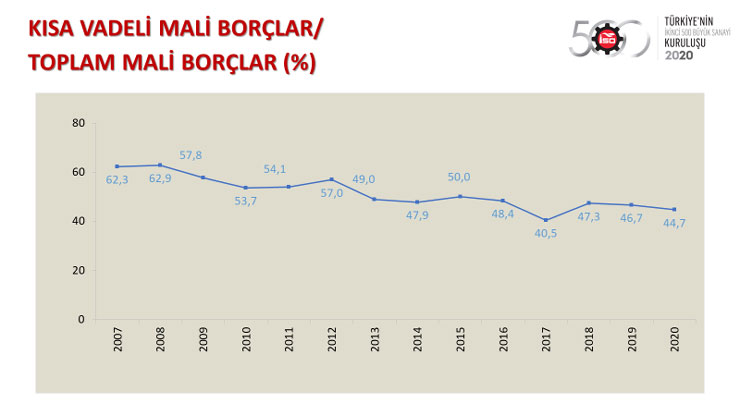 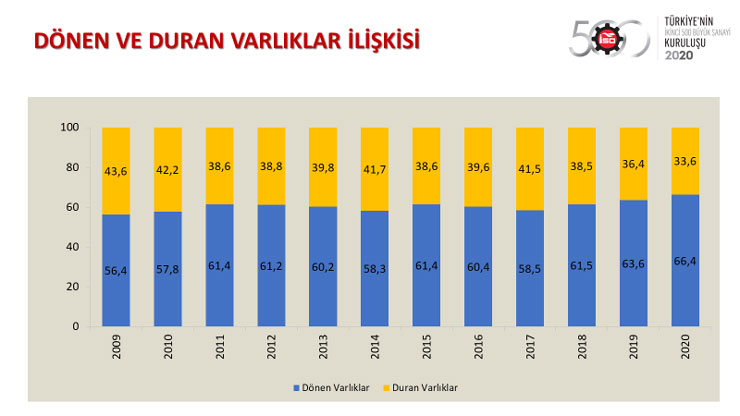 The deterioration, on the other hand, is thought to be caused in part by the fact that the entities in the companies' balance sheet have not been subject to revaluation for many years.

One of the issues that industrialists expect to find a reasonable solution in recent years is the transferable VAT receivables; these continue to be a serious problem for both ICI 500 and ICI Second 500 companies. This burden, as it may be recalled, for ICI Top 500, amounted to TL 12.4 billion, up 14.3 per cent in 2020. In ICI Second Top 500, the transferred VAT increased to TL 2.5 billion, up 31%, compared to the previous year.

This indicates that VAT receivables are starting to become a much heavier financial burden for companies in the ICI Top Second 500 league, as it is in the ICI 500.

In ICI Second Top 500, the number of profit-making firms climbed from 430 to 443, while the number of loss-making organizations declined from 70 to 57 in 2020. This makes the number of profitable businesses reach the highest number for the period 1998-2020. In the economic and financial conditions that emerged in 2020, companies focus on increasing their profitability. Support factors such as low-interest loan facilities seem to contribute to the increase in profitability.

It is noteworthy that, in terms of EBITDA, almost all (495 companies) of the ICI Second Top 500 closed the year with profit.

The industrial sector maintains its position as one of the most crucial fields for employment and qualified human resources. 2020 has been a special year especially in terms of business life. Due to the pandemic, the health of the workforce has become even a greater priority. Industrial companies have had to interrupt their activities intermittently. 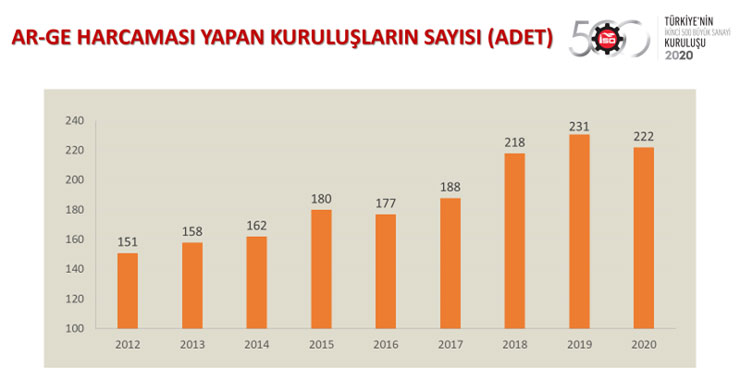 The number of companies performing R&D in the ICI Second Top 500 was 222 in 2020. Although there is a decrease compared to 2019, this number was the second highest ever measured. R&D activities are vital for the competitiveness of the industrial sector, and it is also an important finding that despite the challenging conditions in 2020, nearly half of the ICI Second Top 500 continued their R&D studies.

Despite the expectation of a rise, the number of organizations spending money on research and development remains below the targeted level. 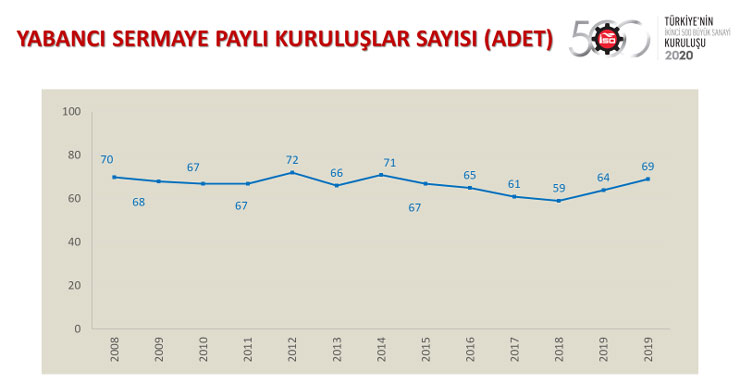 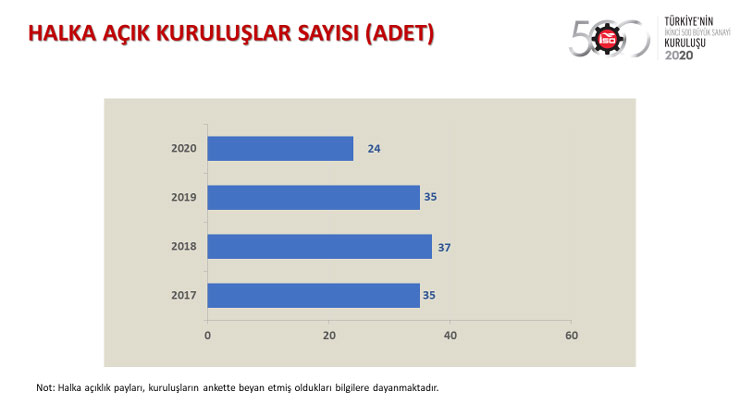 The limited number of publicly-held companies makes it clear that the link between the industrial sector and the capital markets needs strengthening. This fact clearly points out the importance of supporting industrial companies in opening up to capital markets and raising funds from these markets.

When the ICI Second Top 500 organizations are ranked according to their relevant chamber, it is noteworthy that the Anatolian weight in the industry is increasing and its distribution in Turkey has started to show a more balanced development. 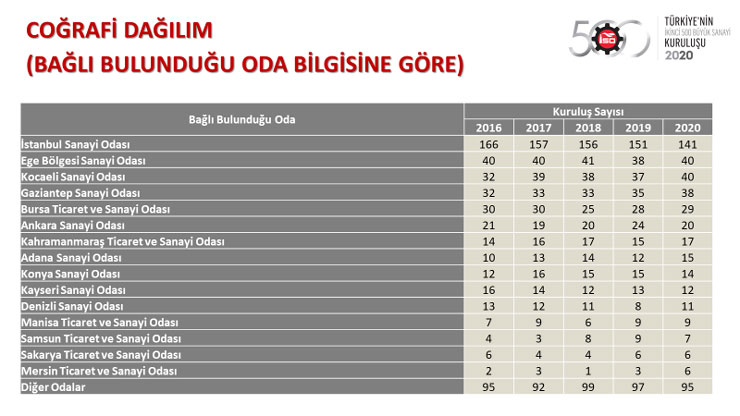 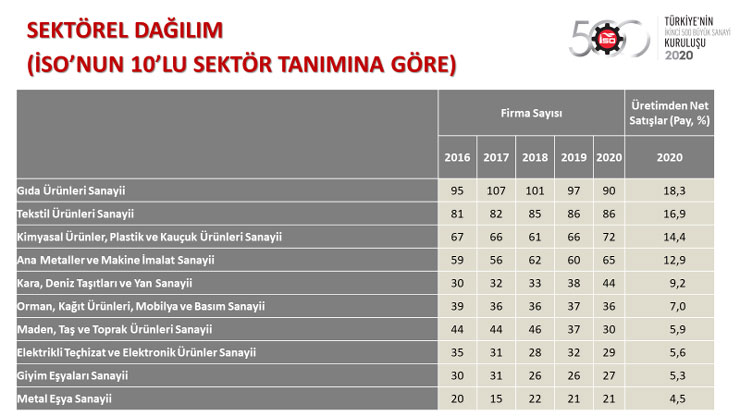 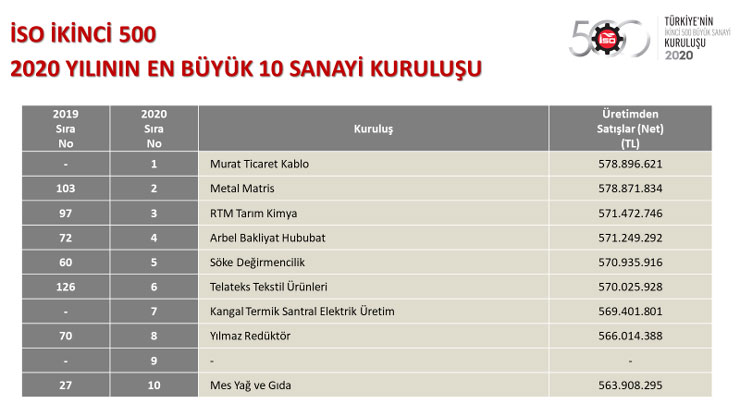